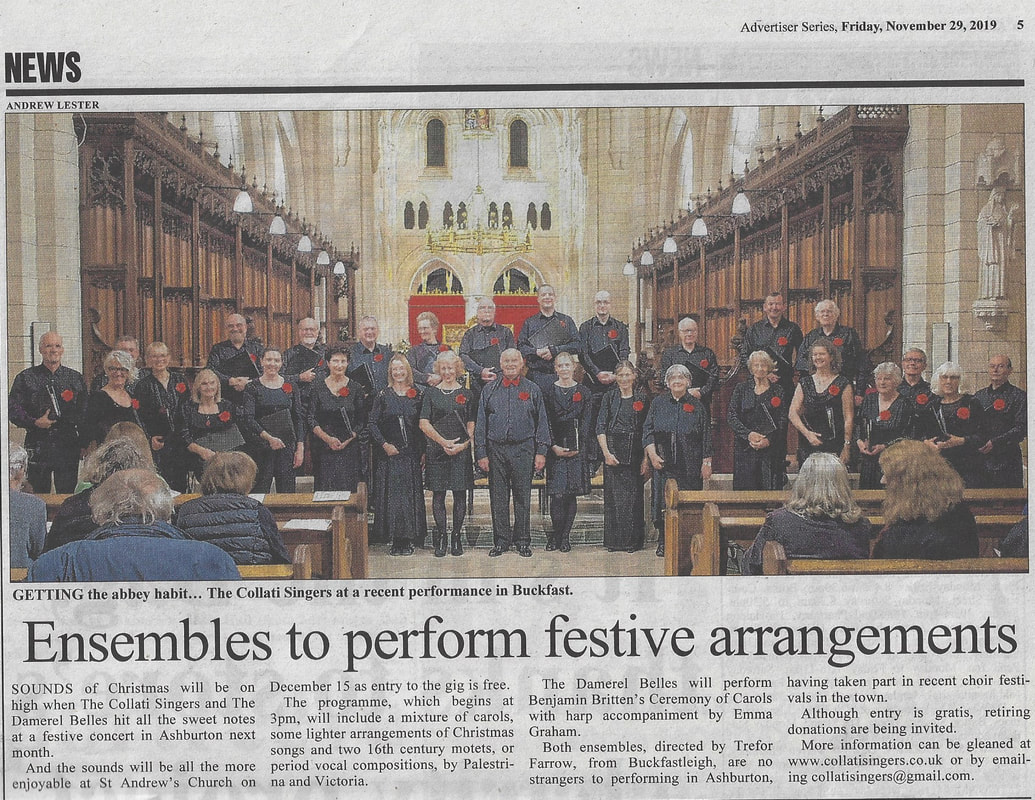 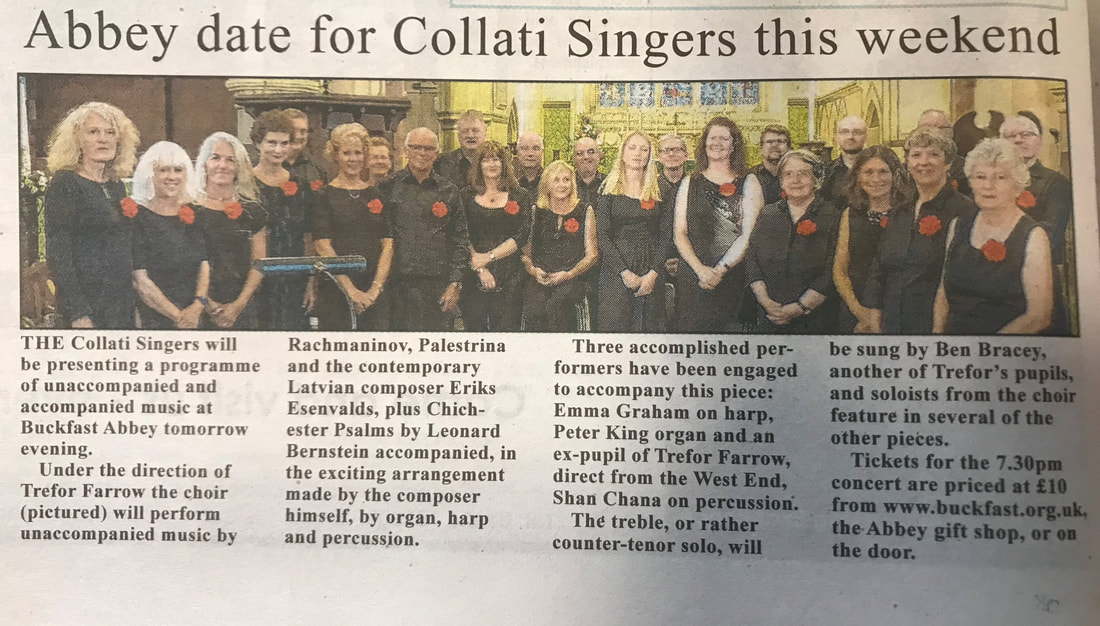 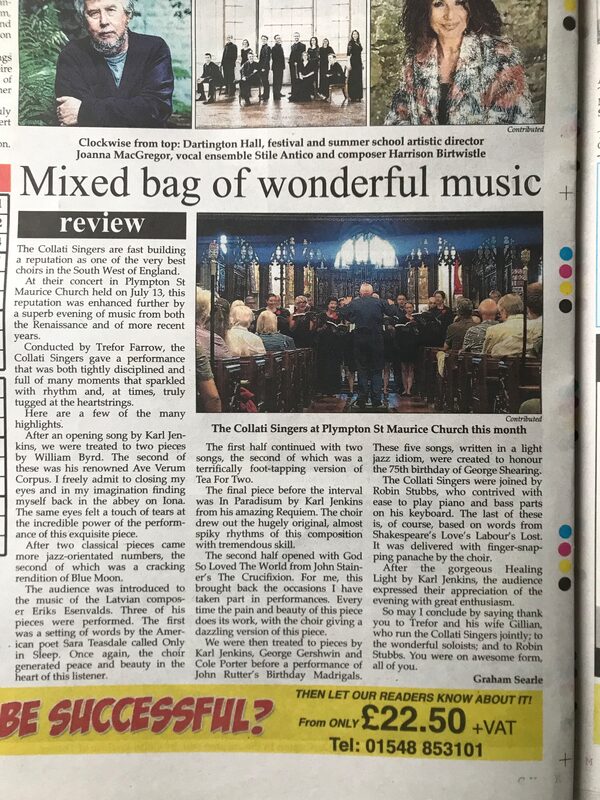 ​MUSIC FOR A SUMMER’S NIGHT - review by Graham Searle 14.07.2019 (as appeared in Ivybridge and South Hams Gazette)

The Collati Singers are fast building a reputation as one of the very best choirs in South West England. At their concert in Plympton St Maurice Church held on the 13th July 2019 this reputation was enhanced further by a superb evening of music from both the Renaissance and of more recent years.

Conducted by Trefor Farrow, the Collati Singers gave a performance that was both tightly disciplined and full of many moments that sparkled with rhythm and, at times, truly tugged at the heart strings.

So here are few of the many highlights just to give you an idea of what you missed!

After an opening song by Karl Jenkins, during which the choir processed from the back of the church we were treated to two pieces by William Byrd. The second of these was his renowned “Ave Verum Corpus”. I freely admit to closing my eyes and in my imagination finding myself back in the Abbey on Iona. The same eyes felt a touch of tears at the incredible power of the performance of this exquisite piece.

After two classic more jazzed orientated numbers, the second of which was a cracking rendition of “Blue Moon”, the audience was introduced to the music of the Latvian composer, Eriks Esenvalds. Three of his pieces were performed. The first of these was a setting of words by the American poet Sara Teasdale, “Only in Sleep”. Once again, the choir generated peace and beauty in the heart of this listener.

The first half continued with two songs, the second of which was a terrifically foot-tapping version of “Tea For Two”.

The final piece before the interval was “In Paradisum” by Karl Jenkins from his amazing Requiem. The choir drew out the hugely original, almost spiky, rhythms of this composition with tremendous skill.

The second half opened with “God So Loved The World” from John Stainer’s “The Crucifixion”. For me, this brought back the occasions that I have taken part in performances… and every time the pain and beauty of this piece does its work, the choir giving a dazzling version of this.

We were then treated to pieces by Karl Jenkins, George Gershwin and Cole Porter before a performance of John Rutter’s “Birthday Madrigals”. These five songs, written in a light jazz idiom, were created to honour the 75thbirthday of George Shearing. The Collati Singers were joined by Robin Stubbs who contrived with ease to play piano and bass parts on his keyboard. The last of these is, of course, based on words from Shakespeare’s “Love’s Labours Lost”. It was delivered with finger snapping panache by the choir.
After the gorgeous “Healing Light” by Karl Jenkins, the audience expressed, with great enthusiasm, their appreciation of the evening.

So may I conclude by saying thank you to Trefor and his wife Gillian who co-run the Collati Singers, to the wonderful soloists and to Robin Stubbs. You were on awesome form… all of you.

Graham Searle 14.07.2019
Collati Singers Concert Review by Alice Taylor, April 2019 (for her Gold Arts Award at Ivybridge Community College):
On Saturday 6th April 2019, I went to see the Collati Singers, conducted by Trefor Farrow, perform at St. Mary’s Church, Totnes. I thought that the concert was brilliant and well-arranged. The programme was very informative, giving a background to both the piece and the composer. Additionally, the choir presented themselves very smartly. I particularly liked the red flowers on the ladies’ dresses and mens’ jackets. Furthermore, the SATB choir was stood in such a way that each group of voices complemented each other.
The programme consisted of unaccompanied music from the Renaissance and Early Baroque periods alongside pieces from the 20th century, by a Polish (Pawel Lukaszewski), a Latvian (Eriks Esenvalds), and two English composers (John Rutter and Will Todd).
St Mary’s Church in Totnes provided the perfect location to absorb the choral music. The high ceilings provided superb acoustics that the choir used to create an impressive, warm/rich timbre. It is often tricky to control dynamics when singing in a vast, somewhat echoey space, but the levels were well balanced and each part could be heard.
The choir wowed us with the first piece ‘O Clap Your Hands’ (from Psalm 47) by Orland Gibbons (1583-1625). This was an incredibly complicated piece, with a polyphonic texture and some antiphonal sections.
The ‘Two Lenten Motets’ by Pawel Lukaszewski (b.1968) also came in the first half of the concert and was nicely placed between a number of Renaissance pieces, such as ‘Ave Verum Corpus’ by William Byrd (c.1540-1623) and ‘When David Heard' (from Samuel 18:33) by Thomas Tomkins (1572-1656). Lukaszewki perfectly grasped the idea of a cappella expressing his deep faith. The choir enchanted the audience through beautifully measured and tailed-off phrases, singing with passion and purity.
Soprano soloist Fee Machen mesmerised us in the piece ‘Only in Sleep’ by Eriks Esenvalds (b.1977) that came in the second half of the concert. She brought the words to life and the choir supported her beautifully by controlling their dynamics so that the soloist could be easily heard and identified.
In ‘O Salutaris Hostia’, by Eriks Esenvalds (b.1977), I particularly enjoyed soloist Janet Hooper, who was joined by Fee Machen, who had already previously soloed. Janet and Fee’s voices delicately portrayed this eucharist hymn which was complimented so beautifully by the rest of the choir.
The finale ‘I Was Glad’ by Henry Purcell (1659-95) was a five part anthem that was a perfect exhilarating end to the concert. The piece was similar to ‘O Clap Your Hands’, with imitation, and being sung at a fast tempo.
On leaving the church, I noticed a number of individuals outside – it was clear that the music had not only captivated the audience inside, but had also attracted the attention of passers-by. A massive thank you to the Collati Singers for producing a seamless, well-rehearsed concert. 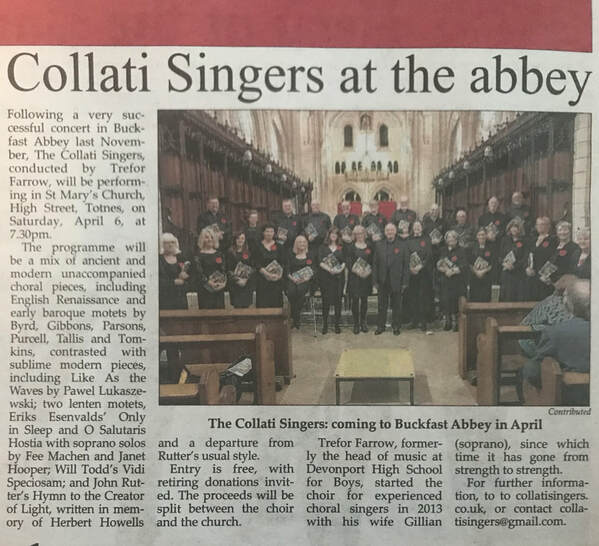 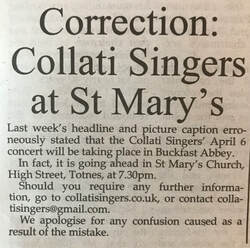 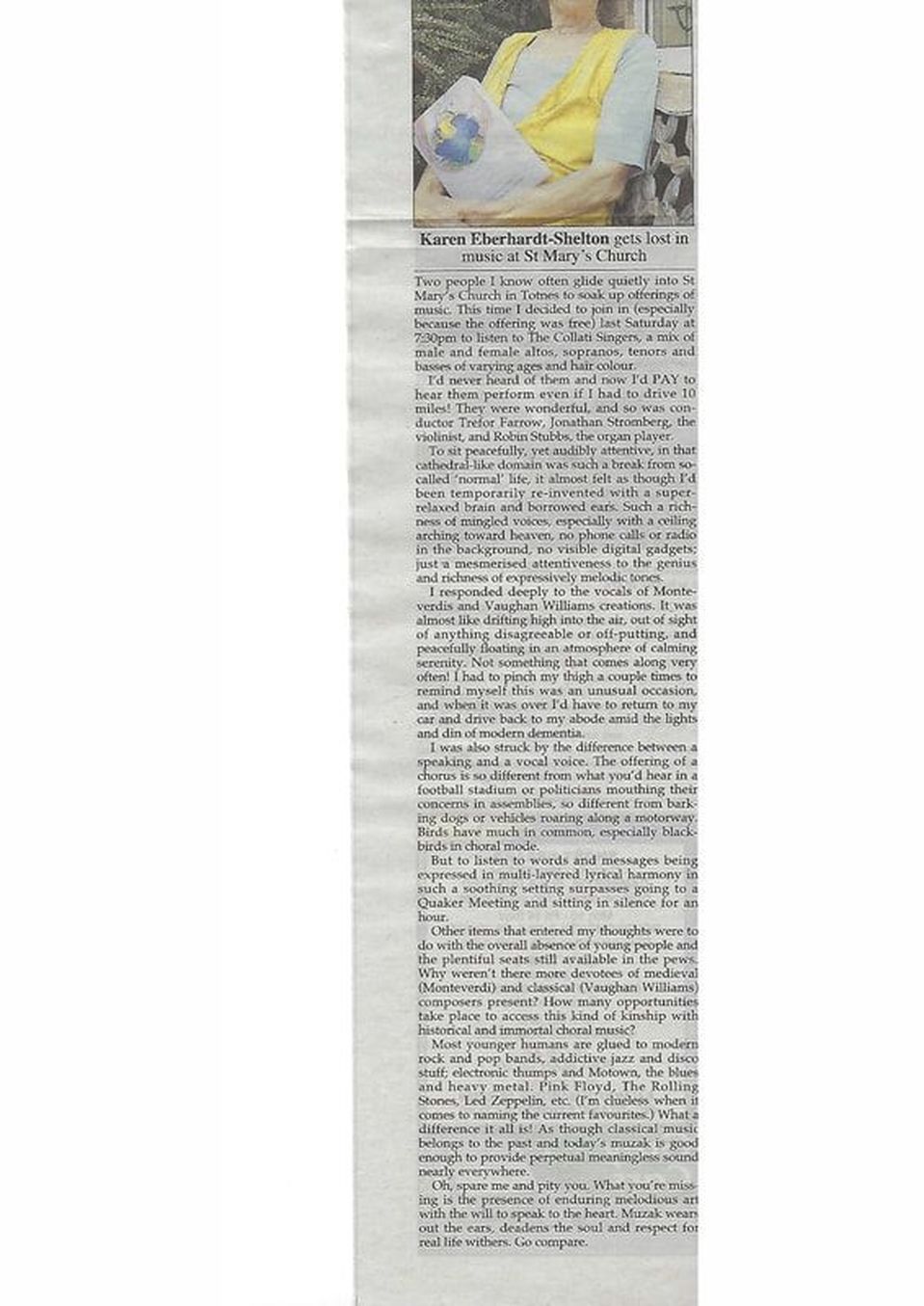 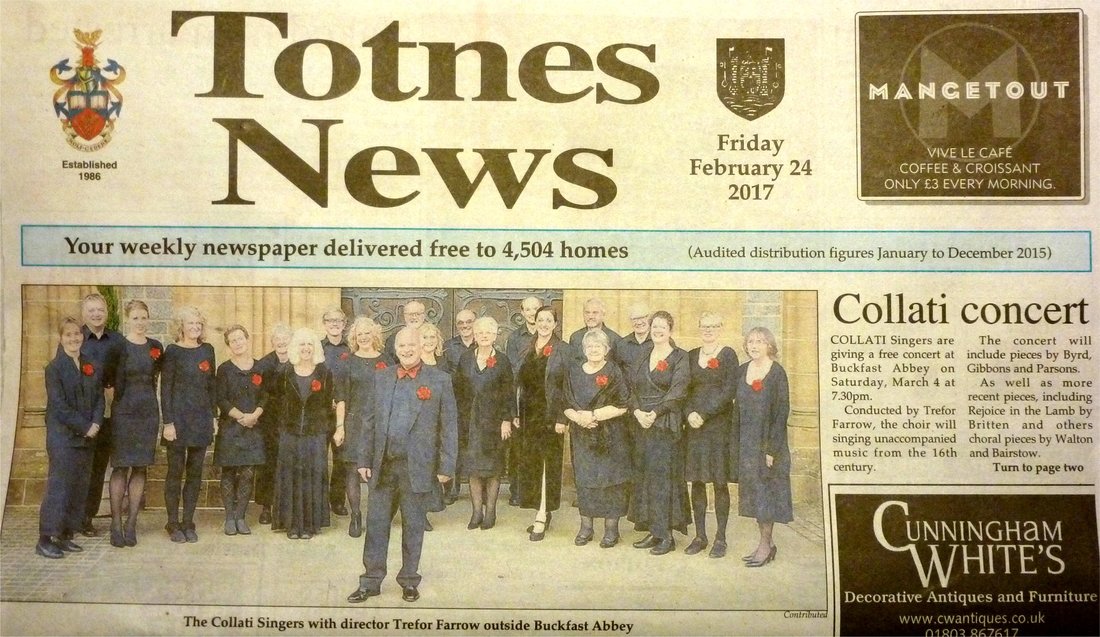 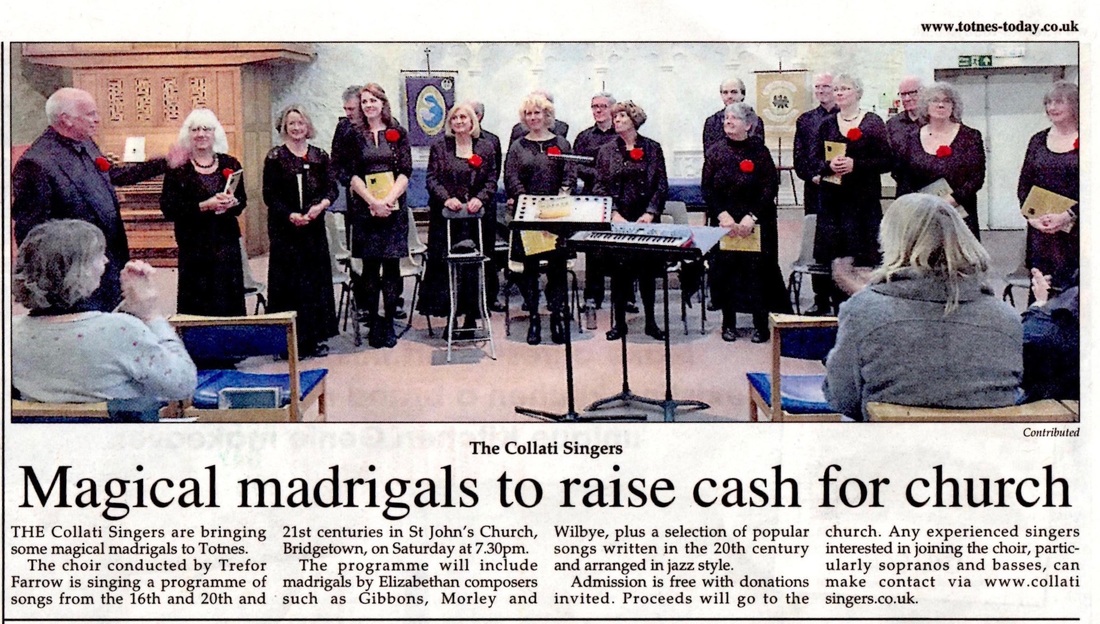 Review of concert in Yealmpton April 2014
THE SOUNDS OF SINGING!

As an avid supporter of live music, I am always on the lookout for that Shangri-la of performance, perfect acoustics. There is, perhaps, no such thing. Having been to venues all over the British Isles, on Saturday April 5th, I found somewhere that comes closer than most to this much sought after peak of excellence.

And it was a lot nearer than you think… for Trefor Farrow and his marvellous Junction Singers gave a concert that showed off the terrific performance possibilities of St. Bartholomew’s in Yealmpton.

The performers could not believe their luck as their voices, raised in wonderful harmony, soared up to the roof and beyond, no doubt!

The varied programme also proved some very important points, the first of which was that music presented in a church does not have to be of a religious persuasion. Whilst we had two motets by Palestrina, the “Missa Brevis” by Richard Rodney Bennett, a set of thrilling and deeply moving songs by Morten Lauridsen and two lovely compositions by Gillian Webster (one of this gifted chamber choir’s members), the second half was a real treat. There were some dazzling and foot-tapping renditions of classic popular songs by the likes of Cole Porter and George Gershwin – although my favourite was “Sit Down, You’re Rocking the Boat” from “Guys and Dolls”.

We’ve all heard such songs on CD or the radio; but nothing compares with hearing such material live, especially when they are performed with such panache and precision. The Junction Singers really do deserve your attention as do the environs of St Barts with its crisp and clear sounds, for the building really does enhance the enjoyment of music.